Three award-winning photographers worked on the project and each brought their own distinct style and perspective to depict the issue of hunger in their own way.

The exhibition is on display at the More London Riverside development near Tower Bridge, London until the end of October 2019. However, if you can’t make it in person, or if you just can't wait to take a sneak peek, here are some of the images and stories from South Sudan that will feature.

The exhibition is part of Concern’s Free From Hunger appeal. Money raised from the appeal will help ensure mothers and babies get the food, water, nutrition and healthcare they need to recover from malnourishment and stay strong and healthy in the long term.  All donations received before 24 December will be matched pound for pound by the UK government, ensuring even more children get the nutritious food and healthcare they need to reach their full potential.

This matched funding will go towards Concern’s work to improve the health and nutrition of mothers and children under five in the Central African Republic, where poor nutrition has led to the country being ranked as the world’s hungriest. The country has one of the world’s highest rates of child mortality, ongoing conflict has severely affected the livelihoods and living conditions of over half of the population, and over a million people have been forced from their homes, severely affecting households’ livelihoods and access to food.

South Sudan has been beset by frequent conflict since it gained independence in 2011. Over two million South Sudanese people have since fled into neighbouring countries. 1.74 million people are displaced inside the country. When fighting started, civilians looked for protection and refuge at existing United Nations bases and these have become Protection of Civilian camps (PoCs). In 2017, famine was declared in some parts of the country and currently 61 per cent of the population do not have sufficient access to food.

Concern’s nutrition work in South Sudan focuses on the prevention and treatment of acute malnutrition in children under five and pregnant and breastfeeding mothers.

To reach the most remote communities Concern has mobile health teams, provides training to government health staff and supports 49 government health facilities to ensure that children can receive treatment for the three killer diseases – malaria, pneumonia and diarrhoea.

I decided to make a diptych of portraits and plates because in this day and age we are obsessed with Instagramming our food; delicious dinners and trips to fancy restaurants. I thought by seeing what a daily meal is for people living in extreme poverty we might be able to relate to the notion of hunger with a little more empathy and compassion. 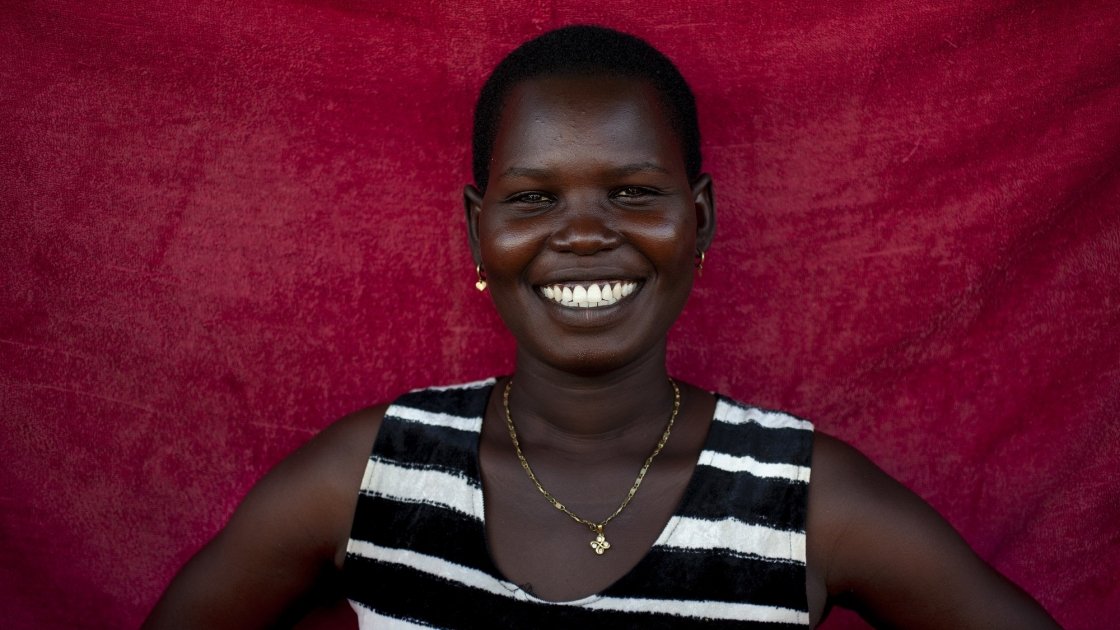 Idil* lives with her three children in a POC in Juba, South Sudan. Photo: Abbie Trayler-Smith 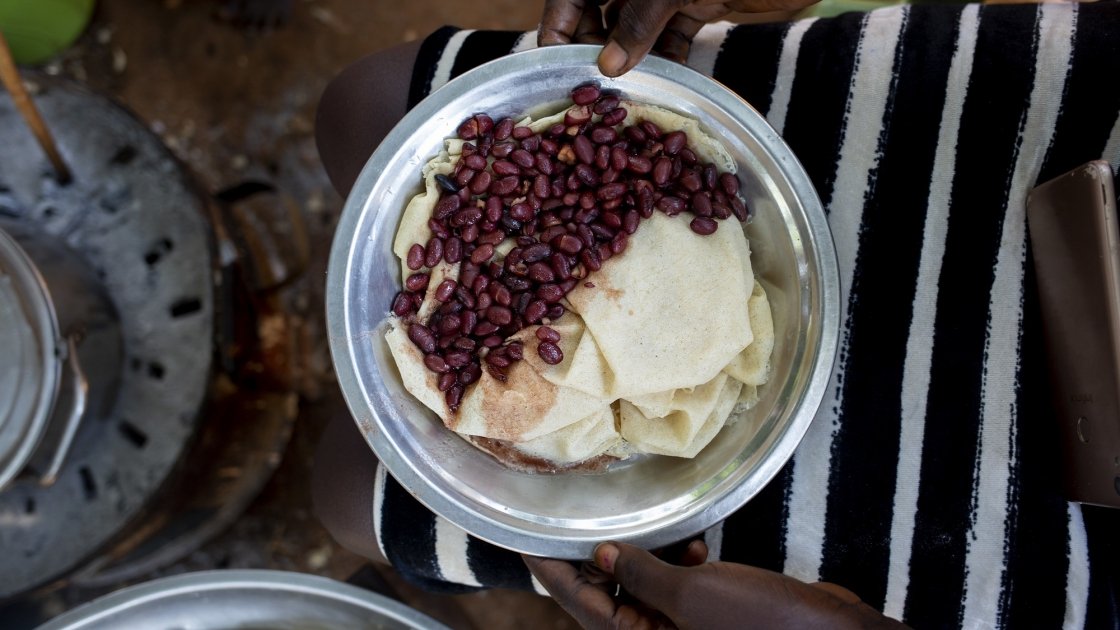 Idil* lives with her three children in a POC in Juba, South Sudan. Photo: Abbie Trayler-Smith

26-year old Idil* and her three children have lived in a PoC camp since 2014. Currently, they do not have ration cards and so mainly survive on food given to them by their neighbours. Idil likes cooking but does not have enough food. Her 18-month-old baby girl, Nyadiu*, has been in and out of Concern’s nutrition programme since she was six months old. Idil said:

Nyadiu is so much happier now than before. Concern really is doing something good for us. Without Concern in this area, children can really suffer a lot. 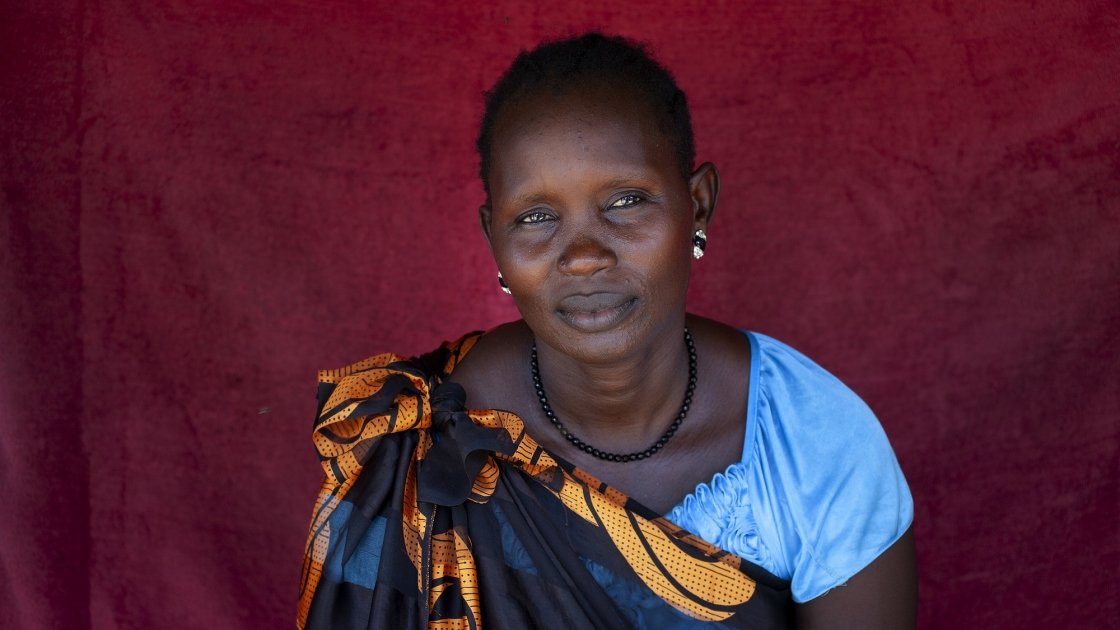 Dukan* lives with her family in a POC in Juba. Dukan* is cooking Walwal. Photo: Abbie Trayler-Smith 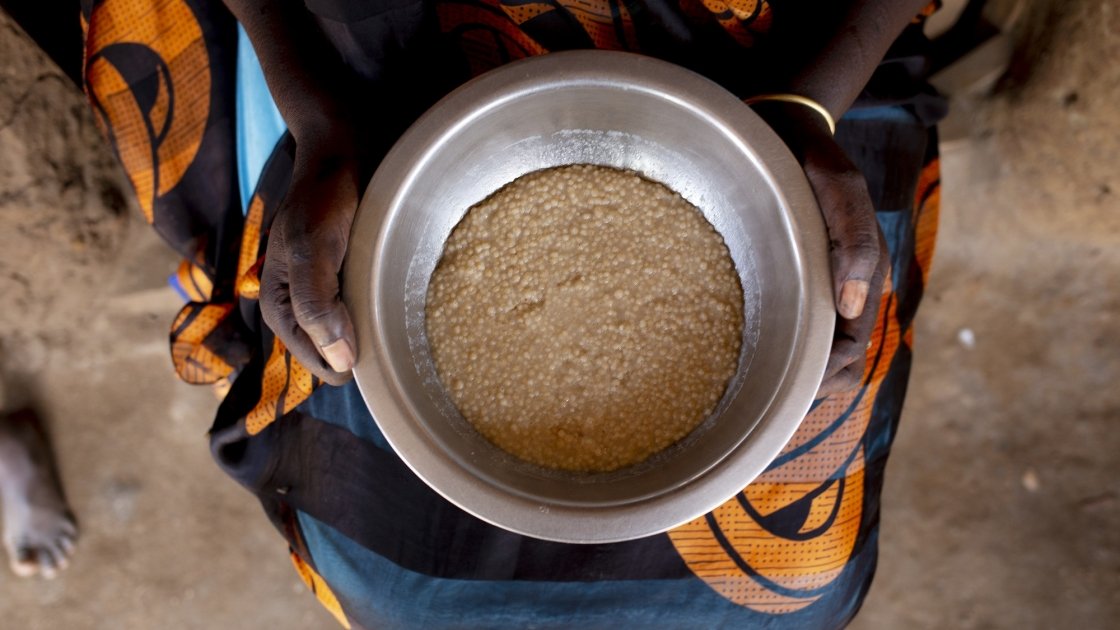 Dukan* lives with her family in a POC in Juba. Dukan* is cooking Walwal. Photo: Abbie Trayler-Smith

Single mum Dukan* has lived with her children in a PoC camp in Juba since 2015. Her husband died in the crisis. Life in the PoC is very difficult as there are few opportunities to earn money and there is a lack of nutritious food and clean water.

Her daughter, nine-month-old Yasmiin*, has been on a Concern therapeutic feeding programme since April and is getting better. Dukan said:

Concern is saving the lives of our children. 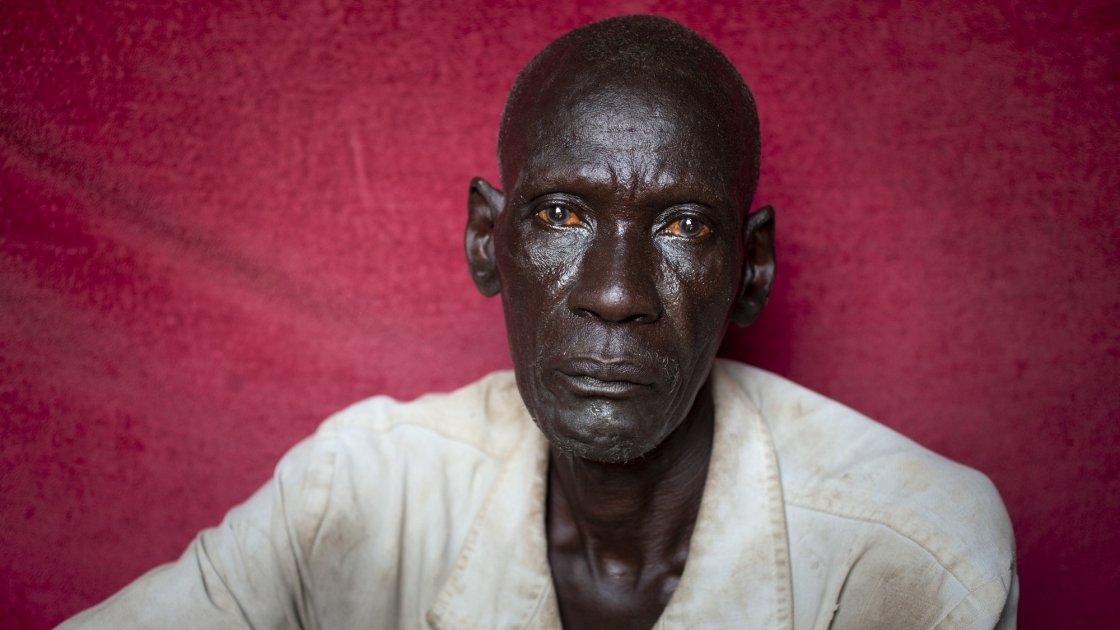 Nasil* lives with his brother Gatlit* in one room with their children. Photo: Abbie Trayler-Smith 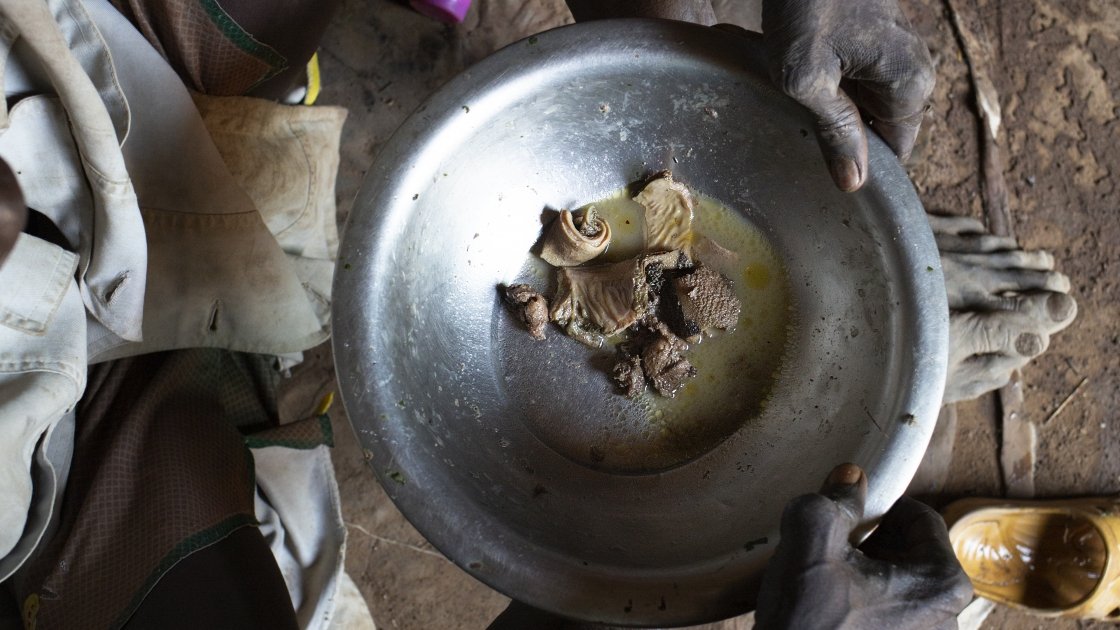 Nasil* lives with his brother Gatlit* in one room with their children. Photo: Abbie Trayler-Smith

Brothers Nasil* (pictured) and Gatlit* live together with their nine children in a small house made of sticks, mud and a few bricks. Nasil’s wife died three years ago and Gatlit’s wife left two years ago. Together, the brothers are doing everything they can to look after their children but with no way of earning an income, they have to beg at the butchers for animal skin. They then scrape the remnants of meat off to eat. Gatlit said:

I worry about the future because there is no food for the children and they can’t go to school.

Concern recently brought Nasil and Gatlit mosquito nets and are enrolling them onto a programme to receive regular food aid from Concern so they are able to feed their children. 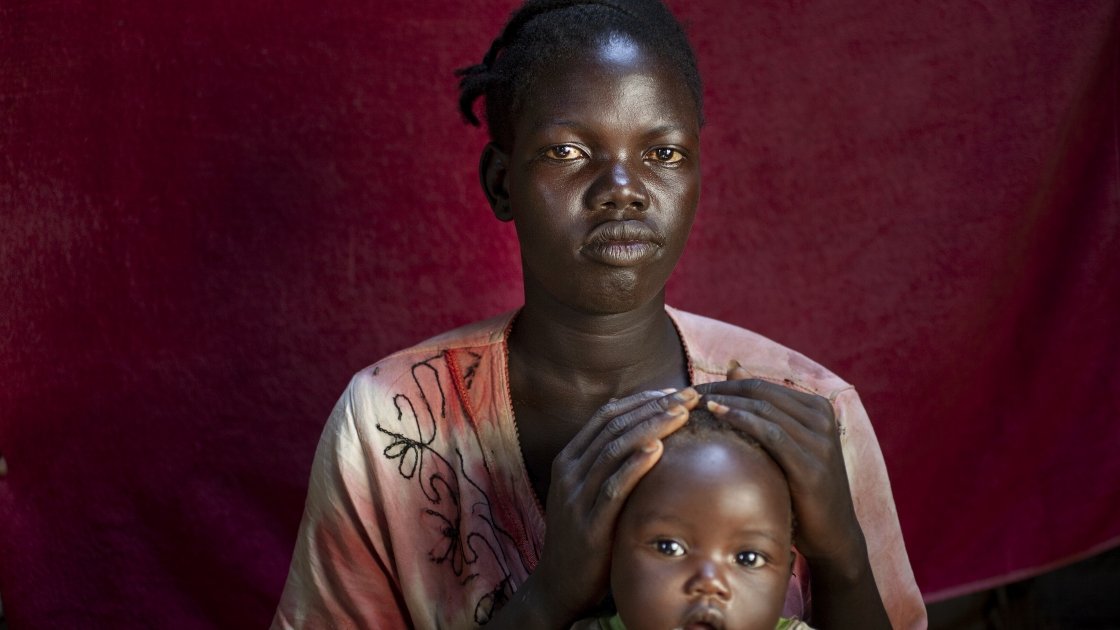 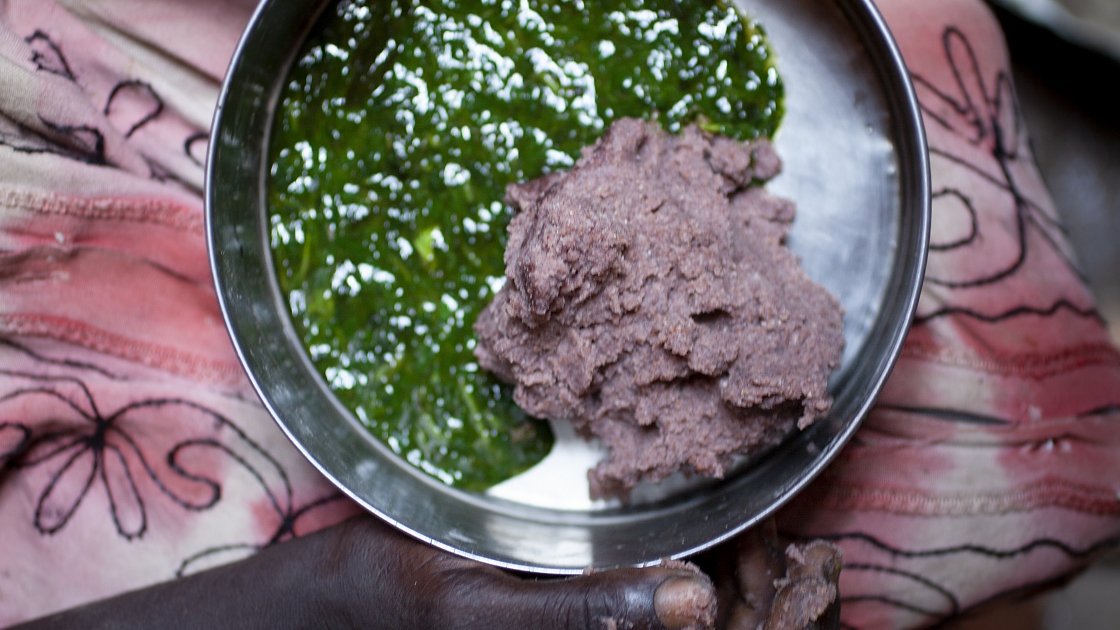 Twenty-three-year old Uba*  left her abusive husband last year while she was pregnant and has lived in Aweil East, in the north of South Sudan, ever since.

Currently, Uba earns the equivalent of £1.80 a day working on people’s farms but reveals that sometimes they can go three weeks without being able to buy food, during which her neighbours give her any spare they have.

Today, all Uba has to eat is sorghum, and she is breastfeeding her youngest child, Bilan*.

If I cannot breastfeed, my baby cries. Sometimes I can get a lot of dizziness. There is not enough milk if I have not had enough to eat.

Thirty-year-old Leylo* makes a living selling groundnut paste (a kind of peanut butter) or local brew (made of sorghum and sugar) at the market. Whilst pregnant with her youngest child, Dit* (six months old), Leylo felt weak and dizzy so took herself to a Concern-led health facility where she was put on a nutrition programme.

I was very weak when I was pregnant. Even walking was difficult for me. I was feeling dizzy and vomiting. Then I went to the facility and was screened, which is where I found out I was malnourished and admitted to the programme. 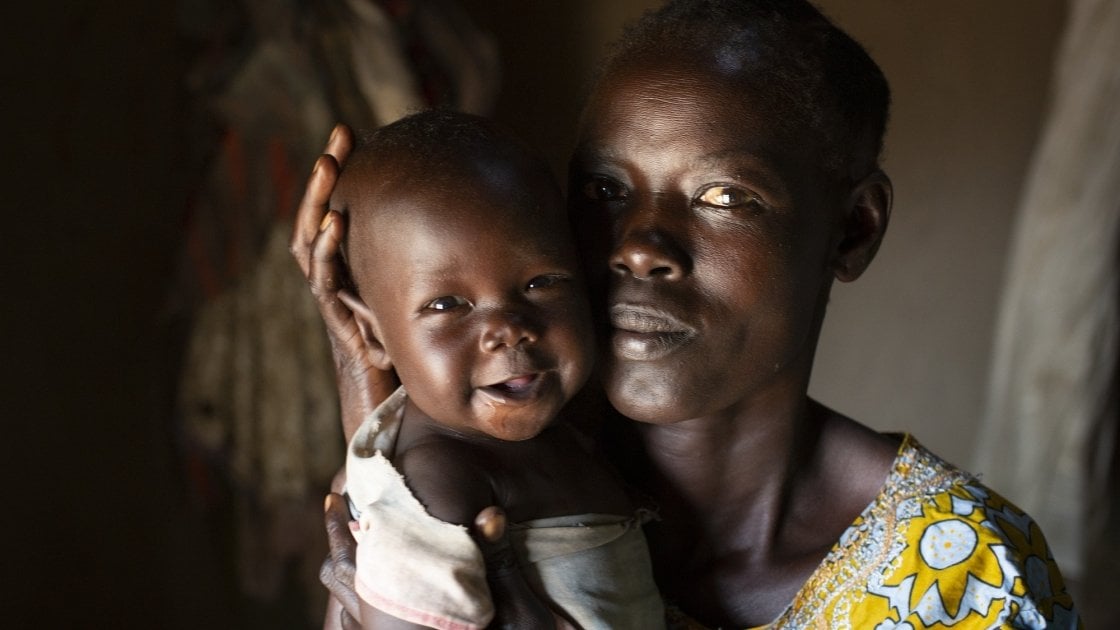 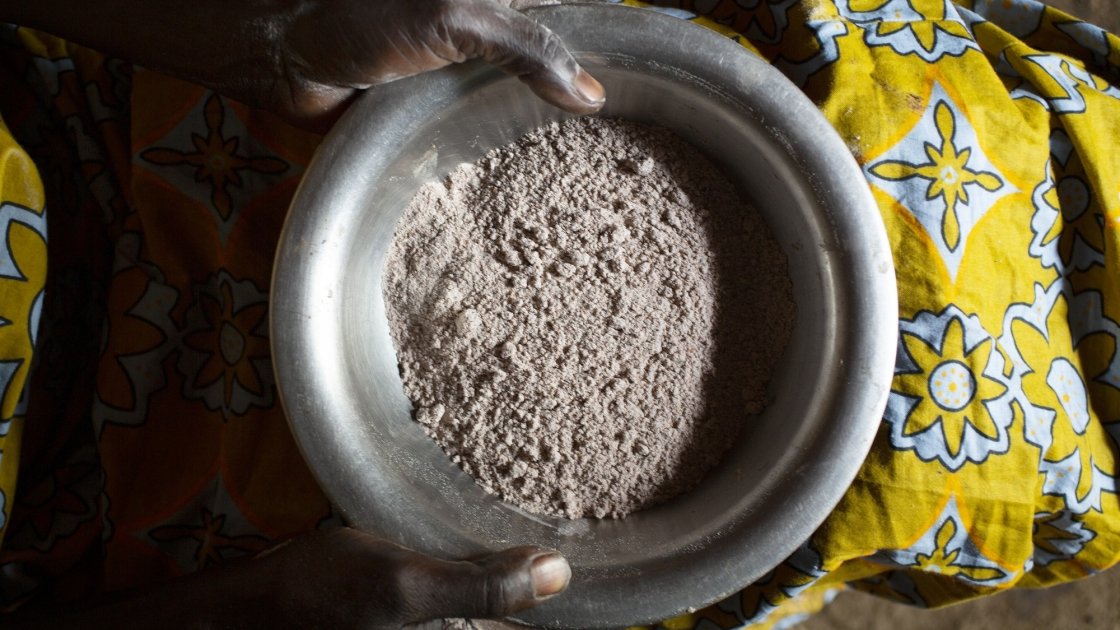 Leylo was in the programme for two months and has since recovered:

Now I feel strong and not malnourished anymore. Without Concern, I would have died.

Most days, twenty-five-year-old Nyarok* and her family can only afford one meal. Both she and her husband rely on casual labour for an income and work when they can. When Sagal* (aged two) began to lose weight, Nyarok took her to a Concern-led centre where she was treated for malnutrition and Nyarok was given advice on preparing nutritious food. She said:

If Concern wasn’t around, my child would have been dead by now. I have no money to take her to get medication. Concern has saved my child. 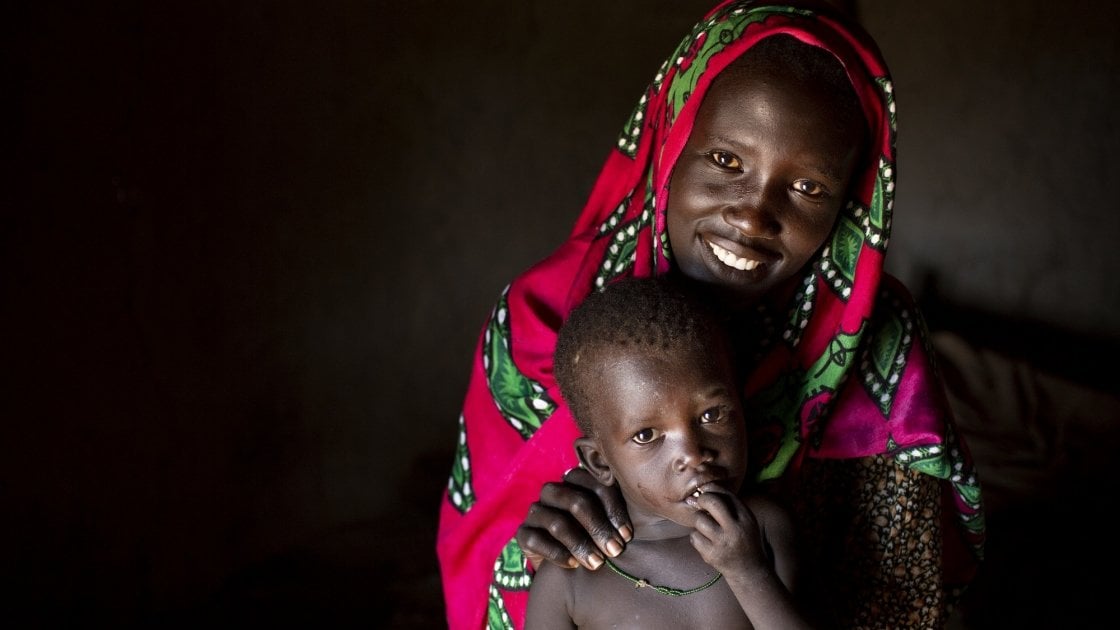 Nyarok* with her youngest child, two and a half year old Axlam*. Photo: Abbie Traylor-Smith 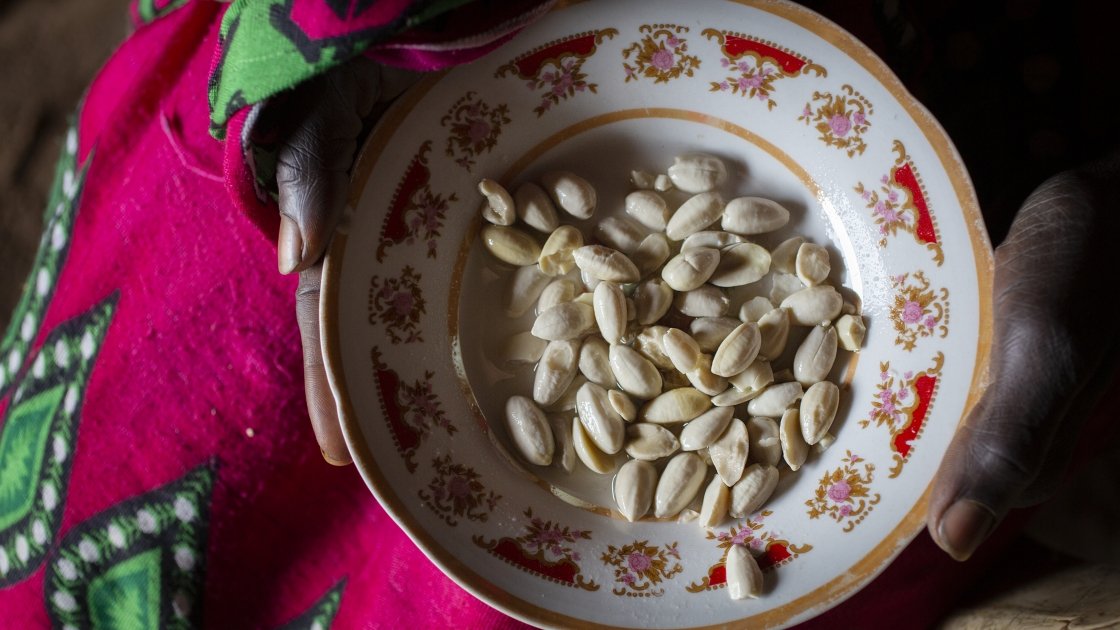 A bowl of food pictured in the home of Nyarok* and her husband Makur*. Photo: Abbie Traylor-Smith

The exhibition is on display at the More London Riverside development near Tower Bridge, London until the end of October 2019. It is free to attend. 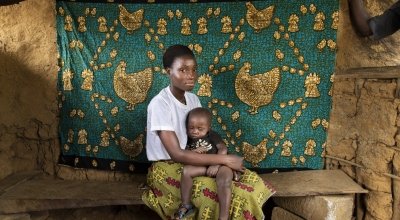 Today, over 150 million children are malnourished and this contributes to three million child deaths each year. Our new exhibition shares the stories of the individuals behind these statistics. Here are some of the images and stories from Liberia that will feature. 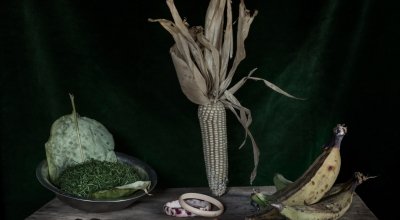 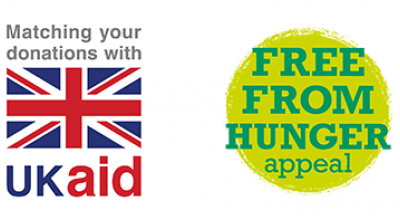 Concern Worldwide (UK) has launched Free From Hunger, a new three-month appeal to support its work in the world’s poorest countries to end malnutrition and hunger.