Over 50 years of fighting extreme poverty. In 1968, a small group of people in Ireland spearheaded a major aid operation in response to famine and conflict in Biafra. Over 50 years later, we’re still working with people living in the most difficult situations, rebuilding and transforming lives, livelihoods and communities.

Responding to famine in Biafra

Concern Worldwide was founded by John and Kay O’Loughlin-Kennedy in 1968, in response to the famine in the breakaway province of Biafra in Nigeria. The widespread conflict that followed Biafra’s attempt to secede from Nigeria caused the displacement of millions and a blockade of food, medicine and basic necessities by the Nigerian authorities. At the height of the crisis in the summer of 1968, it was estimated that 6,000 children were dying every week.

John’s brother, Father Raymond Kennedy, a Holy Ghost Priest, had returned to Ireland from Nigeria with news about the ongoing crisis. In the run-up to Christmas in 1967, John, Kay and Raymond held a press conference in the Shelbourne Hotel to raise awareness and funds. This allowed them to send the first ‘mercy flight’ to Biafra. Some weeks later, Africa Concern was founded. Father Raymond would go on to become the Executive Director as the extraordinarily generous response from the Irish public continued.

On 6 September 1968, Africa Concern sent a 600-tonne ship named the Columcille to Sao Tome, a Portuguese island off the coast of west Africa, filled with vital supplies of powdered food, medicines, and batteries. To avoid the authorities and circumvent the blockade, the supplies were flown in at night. They were distributed the following day by Holy Ghost missionaries, including Concern visionary figures and brothers Aengus and Jack Finucane. With their ongoing commitment and a growing team of volunteers, Africa Concern’s operations materialised into one flight a day over a period of 11 months.

From secret flights, to dodging bombs and overcoming press censorship – listen to our podcast series on Concern’s beginnings and the extraordinary relationship between Ireland and Biafra.

Over time, it was not just aid that was delivered, but Concern volunteers – responding quickly with pragmatic and effective solutions – whose work became the impetus for taking the organisation in a new direction. In 1970, a huge cyclone hit East Pakistan, now Bangladesh, and the public was asked to respond. From these small beginnings, and equipped with practical and visionary leaders – Concern Worldwide was born. 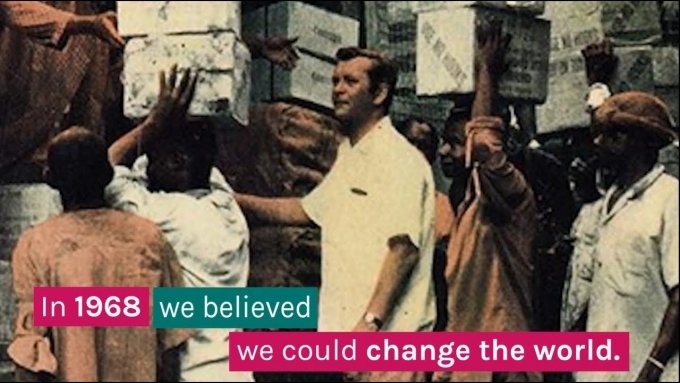 The late Finucane brothers were instrumental in shaping the organisation’s vision out of its formative beginnings. The brothers from Limerick led relief efforts in the world’s most challenging humanitarian contexts throughout the 1980s and 1990s, and each of them continued to play an active role right up until their retirement. Their commitment and courage inspired legions of Concern volunteers and workers.

A timeline of humanitarian response

From our beginnings in Biafra and Bangladesh, we continued to respond to major crises around the world with commitment and dedication, establishing a reputation for the effectiveness of our responses. Here is a look at some of the major emergencies that have defined Concern’s work in the decades that followed.

Extreme poverty continues to devastate lives around world and we continue to respond. From rapid emergency response to innovative development programming, we go to the hardest to reach places to make sure that no one is left behind. We strive for innovation in all of our programmes. As well as responding to emergencies, we focus on health and nutrition, education, livelihoods and gender equality.

What we stand for

Our mission is to end extreme poverty, whatever it takes.

What we stand for

Our mission is to end extreme poverty, whatever it takes.

people reached, in 23 of the world's poorest countries