Fatima is a strong Syrian woman, but she will never forget how she felt when she first became a refugee.

When we first met her, she bravely shared with us how she had fled her home in Syria as a single mother with her children.

“When the war started, the Syrian army wanted to take my son, and force him to kill fellow Syrians. The army knew we’d refuse for our son to be conscripted, so we had to leave Syria. We couldn’t get passports, so we had to pay to be smuggled out. It was a very hard journey. The smugglers drove us in pickup trucks across the desert, and they drugged the children at night so they wouldn’t make any noise and get us discovered.”

Fatima did find safety in Jordan, where she still lives with her children. And while they are safe, life is still incredibly hard. With no ability to earn an income to support her family, she has been reliant on support from funds raised through campaigns like the Ration Challenge.

“We mainly depend on coupons and packages distributed by NGOs,” she says. When we met Fatima, she explained that coupons and packages were getting fewer all the time, though, and that she was trying to adapt by going without breakfast.  “I never thought this would happen to Syrian people who were living in prosperity and dignity,” she said.

Life in the refugee camp

Fatima, here with her children, fled her home in Syria. Photo: Act for Peace

Despite all she has been through, Fatima remains positive and is determined to help her fellow refugees. She has been trained as a volunteer and helps with food distributions. She also plays a vital role in educating other women on self-empowerment and business skills.

People who come here are already shy and broken on the inside. We should not add to this. I’ve made big changes to help people keep their dignity. I want to distribute packages with love and a smile.

As a mum, Fatima tries to create a sense of routine for her boys. “I try and always make sure we eat together as a family. Meal times were very different back in Syria, but it’s still my favourite time.”

And when the war happened, it was difficult to maintain routine around her sons’ education. They missed a lot of school because of the war, but “I make sure they have activities to do every week to keep them practicing,” Fatima explained.

Fatima is grateful for the support she and her family have received as a result of Concern’s Ration Challenge campaign, and when we visited her, she wanted to share one of the meals she makes for her family: Mujadara, which is a simple meal made with beans and rice. 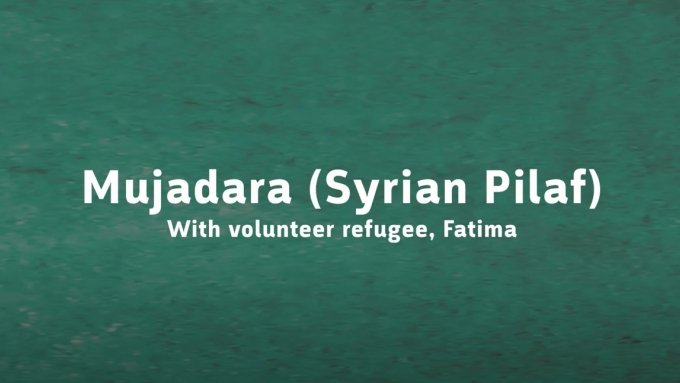 Fatima shows how to cook mujadara

If you’d like to support women and other refugees like Fatima, you can take the Ration Challenge, and show refugees that we really are all in this together.

Today marks three years since the Rohingya people fled violence and persecution in Rakhine State in Myanmar. An estimated 730,000 refugees have crossed into Cox’s Bazar in Bangladesh to find safety and security.

7 hacks to get you through the Ration Challenge

With this year’s Ration Challenge fast approaching, we asked some of last year’s participants for their top tips and tricks…

Today marks three years since the Rohingya people fled violence and persecution in Rakhine State in Myanmar. An estimated 730,000 refugees have crossed into Cox’s Bazar in Bangladesh to find safety and security.

7 hacks to get you through the Ration Challenge

With this year’s Ration Challenge fast approaching, we asked some of last year’s participants for their top tips and tricks…