Conflict affects everybody, regardless of gender or age. However, it has long been accepted that women and girls suffer disproportionately before and after war.

From a lack of access to vital services to gender-based violence, women and girls have been targeted time and time again during periods of conflict.

This International Women’s Day, we take a look at the effects that conflict has on women and girls, and the role they often play in peacekeeping and humanitarian responses.

A scene from the Polish side of the border with Ukraine at Medyka. Photo: Kieran McConville/Concern Worldwide
Alina fled her home in Kyiv once she heard explosions. She had to travel with the few things she could carry, she crossed the border in Poland. Photo Gavin Douglas/Concern Worldwide

The effect of conflict on women and girls

In crisis situations, pre-existing systemic inequalities are often exacerbated. Historically, conflict has resulted in higher levels of gender-based violence against women and girls, and with that, the threat of sexual violence.

As well as gender-based violence being used as a tactic of war, it spikes in the aftermath of conflict, both inside and outside the home. The normalisation of gender-based violence during times of conflict, the breakdown of family and social structures, and the general breakdown of the rule of law can result in higher levels of violence within relationships and families. According to the United Nations’ Human Rights Council, in 2015, it was estimated that more than 70% of women and girls in humanitarian contexts have experienced different forms of gender-based violence, compared to 35% of women globally. In addition, research suggests that approximately one in five refugee or displaced women in complex humanitarian settings have experienced sexual violence.

Conflict also interrupts the delivery of essential services in society, like education and healthcare, and again, this can have a disproportionate impact on previously discriminated against groups – including women and girls. For example, sexual and reproductive health services can be disrupted and, as a result, women and girls can be at greater risk of unplanned pregnancies and contracting sexually transmitted infections - even more so when conflict-related sexual violence rises.

Pictures and footage from Ukraine have shown women giving birth in underground stations, neonatal units being moved into basements, and maternity hospitals being destroyed. In Ukraine, it is estimated that 80,000 women will give birth over the next few months. Many of those have been or will be forced to flee their homes and cross borders into unfamiliar territory. Others who have remained may not have access to critical healthcare. Giving birth should be a joyful experience, but for these women, it could be scary, lonely, and even life-threatening. 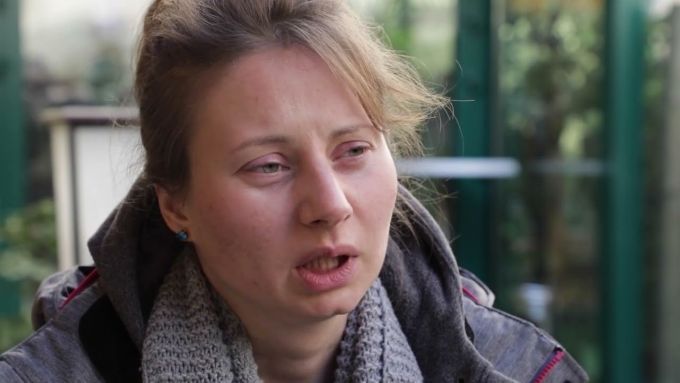 In Ukraine, women and children make up the majority of the 2 million refugees crossing into neighbouring countries, as men stay behind. While many are leaving to meet family or friends in different countries, some have nowhere to go, and women bear the brunt of keeping their families safe, fed and warm while facing an uncertain future.

Those displaced inside Ukraine are also living in fear and, again, women and girls can be disproportionately affected as internally displaced people (IDPs). In addition to gender-based violence and the disruption of vital services, female IDPs can lose their livelihoods due to loss of land, livestock and, in some cases, property titles. Women are generally also the primary caregivers to children, and may be left with even more responsibility as men sign up to fight.

The current situation jeopardises the safety of all Ukrainians and puts women and girls in particular at increased risk of sexual and gender-based violence, especially those who are refugees or otherwise displaced from their homes. These factors must be taken into account in all efforts to monitor and respond to the situation in Ukraine, so that early warning signs of impact are met with an appropriate and proportionate response.

Women are not just “victims”

While women are disproportionately affected by conflict, they also have roles to play in peacebuilding and recovery processes, as combatants, and as defenders of human rights. In 2020, the Human Rights Council recognised the role of women in the prevention and resolution of conflicts, and the importance of their “full, equal and meaningful participation and full involvement in all efforts for the maintenance and promotion of peace and security.”

In the Ukraine crisis, we are seeing the efforts of women - Ukrainian and from neighbouring countries - providing vital services to the displaced.

Pavlo* and Ulyana* pictured in Sighetu Marmatiei, Romania. They left Ukraine with their children when a bomb went off in their town Ivano-Frankivsk, close to the Romanian border. Photo: Gavin Douglas/Concern Worldwide

Ulyana, from Ivano-Frankivsk, close to the Romanian border, was in her home on 21st February when a bomb went off in the town. The explosion was so close that it shook the windows of her house.

Ulyana fled Ukraine with her son and daughter and after a few tense hours, they made it across the Romanian border and reached Sighetu Marmatiei, around three and a half hours from her hometown. While many venture further away from the border, Ulyana goes no further, co-ordinating the relief effort for those still inside Ukraine.

A doctor with over 20 years of experience, Ulyana specialises in gynaecology, and has been using social media to coordinate help and healthcare for women still in Ukraine. She said: “I am tired because it has been one week without sleep. More jobs, more calling, different friends call me… every day, maybe 10, maybe 20, I couldn’t account for every message.”

*Names have been changed for security reasons

People loading trucks with supplies from the local sports hall in Sighetu Marmatiei, Romania. Supplies are bound for Ukraine. Ukrainian Ulyana* says "support on the ground is very visible with people travelling from all over the county to help in any way they can. The local sports hall is filled with bags of food, clothing and other supplies from people and businesses from around the country". Photo: Gavin Douglas/Concern Worldwide

As well as healthcare professionals considering their service in times of crisis, women have been volunteering to bring supplies across the border, as men are unwilling or unable to leave. Women and girls from Poland, Romania and other border countries are also among the volunteers collecting and supplying food, clothes, water and toys to those fleeing Ukraine. 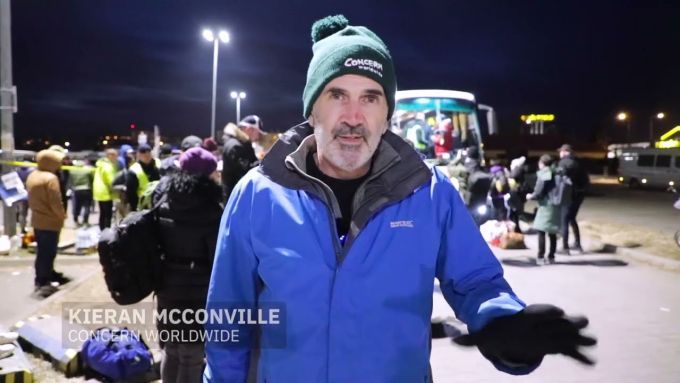 As of 8th March, over 2 million people have fled Ukraine into neighbouring countries, while it is estimated that as many as 5 million will be displaced internally.

Concern Worldwide’s team is on the ground and we have launched a crisis appeal.

“Right now, our team are on the ground in the region assessing the huge humanitarian needs,” Concern CEO Dominic MacSorley said.

“Families, including many with small children, are fleeing with whatever clothes and food they can carry, in bitterly cold conditions, often facing huge queues to reach safety.”

Your donation today will go towards meeting the immediate humanitarian needs of people affected by this crisis, who are vulnerable, frightened and uncertain about what the immediate future holds.

A Wish For International Women's Day

Over the past fifty-plus years those lucky enough to work with Concern have borne witness again and again to the bravery of women in conflict. But we really wish it was otherwise.

The conflict in Ukraine will impact hunger and malnutrition worldwide

The Ukraine-Russia conflict has severe implications on worsening hunger and long term malnutrition for people in Ukraine, but for millions of people globally.

This year’s IWD theme ‘break the bias’ invites all people to cross their arms in solidarity against gender bias.

A Wish For International Women's Day

Over the past fifty-plus years those lucky enough to work with Concern have borne witness again and again to the bravery of women in conflict. But we really wish it was otherwise.

The conflict in Ukraine will impact hunger and malnutrition worldwide

The Ukraine-Russia conflict has severe implications on worsening hunger and long term malnutrition for people in Ukraine, but for millions of people globally.

This year’s IWD theme ‘break the bias’ invites all people to cross their arms in solidarity against gender bias.