More than 500,000 people, mostly Rohingya women and children, are in urgent need of shelter, medical care, water and food as they arrive exhausted and traumatised in Bangladesh. Concern is on the ground and has launched an appeal as part of the DEC. Read more about how we are helping.

Concern Worldwide, alongside our local partner agencies, has worked in Bangladesh since 1972 and has mobilised an emergency team to work with the Rohingya refugees in Cox’s Bazar. We are concentrating on nutrition, distribution of food and household items, water and sanitation. We are currently providing 48,000 Rohingya refugees with food rations and more than 100,000 refugees with nutrition services, mainly children, pregnant and breastfeeding women from Rohingya communities.

There is limited access to water, to food, to sanitation... 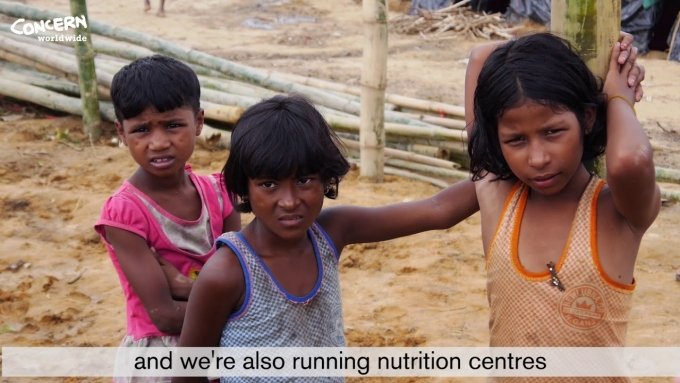 Families have travelled for up to ten days to get to Cox’s Bazaar in Bangladesh from Myanmar. Most have arrived with very little, having to flee their homes and walk with their children or elderly relatives. They have arrived in Bangladesh in need of shelter, food, water and healthcare. The refugees are mainly women and children along with the very old. Many are traumatised.

The needs of the most vulnerable

Rama* with her 18 month old son, Habiron* said her family fled their village in Myanmar after it was attacked and burnt to the ground by soldiers. They have been surviving at this camp in Cox's Bazar through the generosity of local people.

Rama (not her real name) with her 18 month old son, Habiron (not his real name). Habiron has diarrhea and fever. Rama is 8 months pregnant.

Habiron has a fever and diarrhoea and Rama, who is eight months pregnant, spent hours queuing at a health clinic to receive treatment for him. Their nearest water source is a pond of green water, which may well have contributed to the Habiron’s condition. Food is scarce and Rama told us it is their number one priority.

At home we would eat three meals a day – here we have a very small amount of rice twice a day.

Twenty per cent of the refugees are under the age of five, and we’re already seeing really high rates of malnutrition in some of the camps. A handful of rice a day is just not enough for a young child - they need nutrients.

Concern has established a set of emergency nutrition centres where children like Habiron can be screened and parents supplied with sachets of life-saving high energy peanut paste to feed them. In addition we are providing 48,000 Rohingya refugees with food rations. We aim to provide water, shelter and ongoing food assistance to more than 100,000 people.

The Bangladeshi government’s response is willing but currently overwhelmed and so aid agencies, such as Concern, are doing what they can meet the needs of the refugees. However, the situation is deteriorating quickly and we urgently need to expand our response.