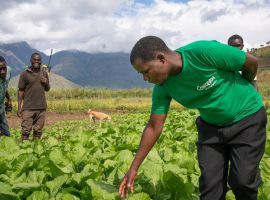 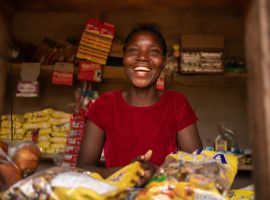 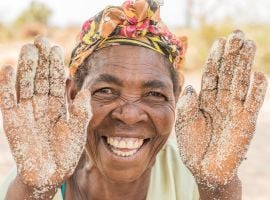 What can the G7 do about rising world hunger?
Story21 June 2022Sally Tyldesley

What will they do to tackle hunger and malnutrition now for people facing crisis levels of hunger, and prevent this from worsening by tackling their root causes?

World hunger levels have been rising, driven by conflict, climate change and inequality. Last year, around 193 million people suffered from acute hunger, and needed urgent assistance – nearly 40 million more than 2020. Worryingly, over half a million people were on the brink of starvation and death last year.

How far have we come since last year’s G7?

Last year, G7 countries agreed a famine compact with $8.5 billion allocated for famine prevention. This compact included a focus on greater anticipatory action, acknowledging that we cannot wait for famine to be declared before we act. However, this was not backed by a clear plan and now we need to see where the funding and action has been focused since.

This year, the situation is dire. Since last year, we have been hearing alarm bells of hunger resulting from recurrent drought in East Africa. Right now, one person is likely dying of hunger every 48 seconds in drought-ravaged Ethiopia, Kenya and Somalia [Dangerous Delay]. Afghanistan also continues to face acute food insecurity, while the Democratic Republic of Congo (DRC) continues to have the largest number of people facing crisis or worse levels of hunger. Covid-19 has dramatically affected health, nutrition, and inequalities – exacerbating these for people living in poverty.

11 month old baby Ahadi is measured with a MUAC band in DRC, to see how his therapeutic treatment is progressing and whether he is out of the red stage of severe acute malnutrition. (Photo: Hugh Kinsella Cunningham/Concern Worldwide, April '21)

The current conflict in Ukraine has further exacerbated hunger, with more impacts to be seen in the coming months. Ukraine and the Russian Federation provide around 30 per cent of the world’s wheat and barley, one fifth of its maize and over half of its sunflower oil. They also supply significant proportions of global fuel and fertiliser – important inputs for agriculture. The crisis has created a surge in food prices with Sudan, Kenya, Ethiopia, Somalia and South Sudan likely to be hit hard.

This year, the G7 need to find more solutions, not just words.

Droughts will continue to grow in number and severity

The drought currently gripping East Africa is one of its most severe in recent history – a result of four consecutive failed or inadequate rainy seasons. Around 20 million people are acutely food insecure in Ethiopia, Kenya and Somalia. The drought will be catastrophic for affected families already living in extreme poverty. It is expected that this year, 5.7 million children across Ethiopia, Kenya, Somalia and South Sudan will be acutely malnourished.

Despite successful resilience building efforts across the region over recent years, communities have been finding it harder to recover between the increasingly frequent and severe droughts – three in the past ten years alone. This increasing frequency of drought is a global trend. Driven by climate change, droughts are projected to increase by more than 30% between 2000 and 2030.

Without immediate ambitious action, the escalating climate crisis will continue to act as a ‘threat multiplier’, deepening global inequalities and disproportionately affecting the world’s poorest and most vulnerable countries. The International Federation of Red Cross estimates that, by 2050, an estimated 200 million people each year will need humanitarian aid because of climate-related disasters alone.

But, disasters do not need to be inevitable

Climate change will increase the frequency and intensity of extreme weather events, but resilience programming aims to strengthen systems that help vulnerable people to withstand and mitigate the negative impacts of recurrent crises, and adapt to new and evolving climatic patterns.

To prevent droughts turning into crises, we need a combination of swift action to limit global climate change, investment in building peoples’ resilience and support for people feeling impacts now, and responding when the early alarm bells ring rather than waiting for the situation to worsen into a crisis.

Despite growing pressure from low-income countries, investments in climate change adaptation have not been prioritised by rich nations. In 2009, rich nations made a commitment to allocate $100 billion annually by 2020 to help developing countries address the impacts of climate change. This commitment had never been met. Since then, G7 nations have agreed to step up action on climate change and renewed a pledge to raise $100bn a year to help lower-income countries cut emissions. However many activists feel like does not even come close to addressing the urgency and scale of the crisis.

After the summit in Britain, G7 leaders also promised to help developing countries move away from coal.

A missed window for early action

It is possible to avert crisis. We know that, if we can respond quickly enough to the threat of a growing crisis, we stand a better chance of preventing it from escalating into a disaster and reducing the impact on the people affected if it does. This was proved during the 2016/17 drought crisis in the Horn of Africa when over 2.9 million people faced crisis to emergency-level food insecurity. A faster and more substantive global response led to lives being saved.

In East Africa, the window for early action has passed. The response is already six months too slow, but the window to prevent widespread catastrophe is also going to close soon.

We welcome the commitments made by the G7  to address pressing and future humanitarian crises such as through the Famine Compact last year, and we welcome the G7 statement last month regarding the need to scale up anticipatory action

However, with more than 270 million men, women and children across the world in need of humanitarian assistance in 2022, we need the right levels of investment to allow for action on the ground to work with the poorest communities to cope with ongoing crises and not just more commitments.

What must the G7 leaders do at Schloss Elmau this month?

There are two areas for immediate action:

1. Responding at scale to the global food crisis

To save lives now and build the foundations to end hunger crises for the last time, we ask the G7 to:

More can and must be done to strengthen the commitments on anticipatory action, climate, and conflict. To achieve more impactful and meaningful action, G7 leaders should:

How is Concern responding to the East Africa Hunger Crisis?

In Somalia, Kenya, and Ethiopia, Concern is responding by supporting health clinics to deliver nutrition assistance for treatment of acute malnutrition in young children, and providing emergency cash transfers to affected communities. But the crisis will require a $4.5 billion commitment globally for an effective humanitarian response in the region.

You can support our efforts too by take action.

We can prevent the next famine if we act now