As Refugee Week approaches, we meet three Syrian refugee women living in Jordan who share their stories of survival and how they have bravely faced life's challenges and struggles.

With help from the work of our partner organisation on the ground, these women are using their skills to earn a small income and are finding ways to support the health and wellbeing of their families in tough circumstances.

Ashia: 'We are strong enough to face the biggest struggles'

Ashia* and her husband Mohanned* once owned a farm in Syria where they cultivated vegetables and reared chickens. But when the conflict started, their lives were quickly turned upside down.

At the beginning of the war…fear and terror surrounded our souls. We tried to flee to any peaceful place in Syria, but all the places were surrounded.

Terrified, she and her family, including her parents and brothers, all fled to different countries. She told us it was really challenging to be apart from the people she loved.

Eventually, Ashia, Mohammed and their three young children made it to Jordan where they camped on the border for three days without food or water. The homesickness was unbearable, but when they arrived at a refugee camp in northwest Jordan — where they live now — she said that people were very welcoming and kind.

Although they felt safe in the camp, Ashia still faced many challenges, such as trying to find a job so that she could feed her family. She knew she did not have anyone to rely on or lean on to borrow money from.

Through attending production kitchen training, Ashia learned how to bulk make pastries such as ghraybeh (shortbread biscuits) with pistachios. She also gained valuable skills in product promotion and sales, which enabled her to start her own business selling pastries.

Ashia is currently expecting her fourth child and is working hard to support her family with her pastry business, which she hopes to expand in the near future.

As her children Zareb*, Ubayy* and Hibah* helped her prepare pastries filled with spinach and spices, and safiha (flatbread with minced meat topping), she told us her family - and many other refugee families like hers - are determined to succeed.

Even though we are forgotten people, we are strong enough to face the biggest challenges and struggles in life. Thanks to you for being with us in our struggles.

Assala: 'It's hard taking responsibility, but I have to endure it'

Assala is doing all she can to create a life for herself and her family. Photo: Mitchel Loveday/Ration Challenge

Assala*, her husband, and young son fled their home in Syria when it was damaged in an attack nine years ago. It took them two days to reach Jordan, and Assala told us when we met her that she cried every step of the way, grieving for the life that she was leaving behind.

In Syria, her family owned a chicken farm and harvested olives. But now, many years later, she is living in a modest tent, doing all she can to create a life for herself, her husband and her teenage son Naser*.

Assala's husband Raed* is currently unable to work because of a back injury, so when the opportunity of casual labour arises, Assala takes it. There are limited options.

It is very hard taking responsibility, but I have to endure it, so I can help my family and not let them go hungry

The family have received food rations - such as rice, flour, oil, beans, lentils, chickpeas and tomatoes - to help supplement their meals.

I feel relieved receiving the food pack because it contains the food we eat and cook...Sometimes we don’t have enough food to feed our family or money to buy it.

Assala shared some of her favourite memories from Syria, which revolved around being with her family and friends. She has not seen the rest of her family since she left and longs for the day when they can be together again.

It was a cold, wet day when we visited her, and she was making red lentil soup using rations that she had received, and a few other ingredients like cumin and onion that she was able to find. She told us that the support she receives means so much to her.

We’re thankful to those people who are helping us. It gives me a great feeling and I thank God so much for this.

Rima: Her children's confidence has grown

After Rima's* daughter and sister were killed in an attack on the city where they lived in Syria, she and her family fled to neighbouring Jordan. They left almost everything behind, including the farm where they used to grow pistachios, olives and pineapples - and escaped with only a few clothes and their identity papers.

For the past nine years, Rima, her husband Kateb*, their five children, and her mother Iman* have been living as refugees in a tent in Jordan. With no way to work, it has been a struggle just to get by.

Rima attended production kitchen training where she learned new skills on how to market and sell traditional Syrian dishes like kubba (spiced meat pasties) in order to earn a small income to provide for her family.

But life here is not always easy. The little money the family have goes to paying for water and gas and to meet other basic needs. And it is not helped by soaring food and fuel prices in Jordan.

Rima is also worried about her children's future and desperately wants them to be able to continue their education.

Sometimes I don’t have money to pay for the school bus and my children go by foot instead. At least, they have a right to learn and go to school like the other children.

Two of Rima's younger sons also attended workshops run by our partner organisation, where they were able to meet and socialise with other Syrian children their age. Rima told us that the boys, who were shy and reserved, have grown in self-confidence after attending the sessions. 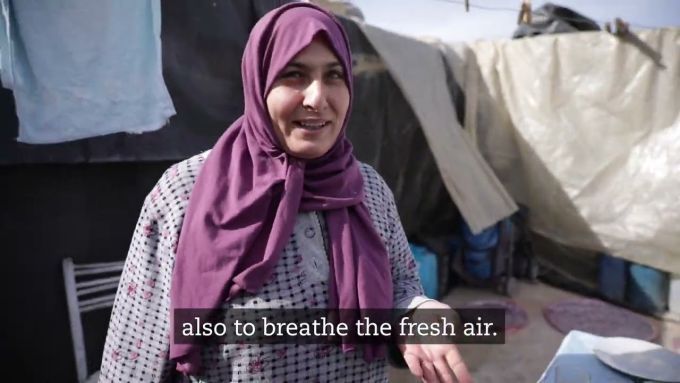 Rima invites us into her home

Inside their tented shelter, Rima and her husband Kateb* have built up a well-stocked kitchen full of spices neatly arranged on shelves donated by neighbours. While outside, they take pride in growing their own herbs.

The burden of providing for the family is eased by receiving vital food parcels.

We thank people for their support, for caring about what we eat and how we live. Thanks again for trying to be in our situation and to see our suffering.

* Names have been changed to protect the identity of the individual

How we support the well-being of Syrian refugee children

For the Syrian people who fled their homes, life has continued but there are a huge range of challenges to contend with, notwithstanding the physical and mental trauma of war and impermanent life that follows for too many.  Children are particularly vulnerable.

In Syria: how concern becomes action

A look at how we’re using a grant from the European Civil Protection and Humanitarian Aid Operations (ECHO) to fund our response in Syria.

Global Hunger Index: Is the world on track to achieve Zero Hunger by 2030?

This year’s GHI explores how we can ensure the right to adequate and nutritious food for all and achieve Zero Hunger by 2030 - amid ongoing climate extremes, conflict and a global pandemic.

How we support the well-being of Syrian refugee children

For the Syrian people who fled their homes, life has continued but there are a huge range of challenges to contend with, notwithstanding the physical and mental trauma of war and impermanent life that follows for too many.  Children are particularly vulnerable.

In Syria: how concern becomes action

A look at how we’re using a grant from the European Civil Protection and Humanitarian Aid Operations (ECHO) to fund our response in Syria.

Global Hunger Index: Is the world on track to achieve Zero Hunger by 2030?

This year’s GHI explores how we can ensure the right to adequate and nutritious food for all and achieve Zero Hunger by 2030 - amid ongoing climate extremes, conflict and a global pandemic.