In Rwanda, an amazing secret spurs a new journey

Aline as a child with her mother Marie-Ange.
News12 September 2018Kieran McConville

On a overcast summer afternoon in 2014, a young woman arrived at the front door of the Concern Worldwide office in London. With her she carried a gift… and an amazing story of survival, redemption, and hope

Growing up in Rwanda in the early part of the 21st century, the horrific events of 1994 were a constant but mostly unseen backdrop to the lives of Aline Joyce Berabose and her friends.

People of my generation, or the ‘post-genocide generation’ as we are called, often don’t know where they fit into that. As I was growing up, my mother tried to avoid the topic because she felt that I deserved a right to live as a normal child.

Then one day, shortly after her 15th birthday, Aline made a life-changing discovery.

Not who she thought she was

Aline had in fact been born in the country then known as Zaire, now called the Democratic Republic of Congo. Naturally, she had a lot of questions for her mother. "I got home as soon as I could to confront my mum. She said 'I knew it was time to explain to you anyway.'"

Sitting in a leafy, sun-dappled garden in the suburbs of Kigali, Marie-Ange Beriman takes up the story. “I moved (from Rwanda) in 1994. I entered Kitale (refugee) camp in DRC. After two years, I became pregnant and life was very hard there. That is when Concern really came into my life.”

The bleak, volcanic flatlands of Katale, near Goma, became temporary home to hundreds of thousands of refugees flooding across the border in the weeks and months following the Rwandan genocide. And it was here that Concern centered its response to what was quickly turning into a new humanitarian disaster, with the threat of starvation and cholera looming.

Current CEO Dominic MacSorley headed up that response. “Goma was a nightmare — overcrowded and insecure," he recalls.

Rwandan refugees gather on the roadside near Goma, having just crossed the border into Zaire in 1994. Photo: Concern Worldwide.

Having endured the privations of refugee life for two years, and now a malnourished mother to a newborn baby girl, Marie-Ange was desperate for help. Concern is the aid agency that she remembers best.

It really touched me deep in my heart when they gave us biscuits, milk and other food. I was so thankful to get that help from Concern.

By squirreling away some of the rations she was receiving, Marie-Ange built up a secret food package and took the decision to return home, on foot.

I ate the biscuits one by one, through the journey of three months, and it gave me the strength to feed my daughter.

Now a smiling, urbane young woman of 22 years, that daughter speaks candidly of her feelings following her mother’s revelation of a hidden past. “It was a really difficult moment for me to understand what my mother had to go through and knowing how lucky I am to be here,” she says. “I could have died from hunger or she could have died from the hunger or she could have simply left me on the street, as I was a burden.”

A change of course

Aline says the knowledge of what had happened changed something deep within her. A childhood dream of becoming Rwanda’s first female airline pilot started to fade. “I felt within me that I had a responsibility to give back to the community and if I became a pilot, I wouldn’t be living that purpose anymore.” She shifted her vision towards community service, working with genocide survivors in a village near her school being the first step.

And so to that overcast summer afternoon in 2014 on the banks of the Thames in London. Invited to travel to the UK to take part in a debating camp at an English university, Aline came bearing a gift from her mother for the organisation to whom she felt a debt of gratitude. Sitting with the Concern team there, she says “I just realised, this is the environment I need to be around."

With the encouragement of her mother, Aline switched her studies to social sciences and began to spread her wings and make her mark. She and a group of like-minded partners founded their own non-profit, African Dream Movement, aimed at bringing young people from war-torn and poverty-stricken countries together to share experiences and learn leadership and other skills. Next on the agenda for the team in the Africa Global Youth Peace Summit in South Africa this December. 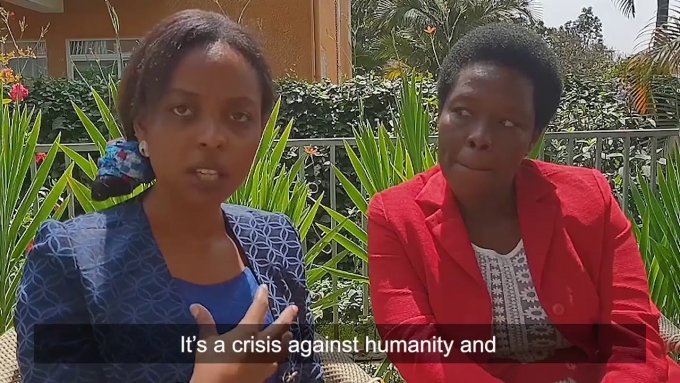 Marie-Ange is obviously proud of her daughter’s drive and enthusiasm for the future of her country and the continent around it. “Through your life, everything must teach you something. If there’s someone who helps you, please help others too.”

As for Aline, or ‘Jojo’ as she’s known to her friends, she believes her back-story has fated her to be a changemaker.

Aline Joyce Berabose has been named as a Youth Ambassador for Concern Worldwide.

A step you make — whether it’s sending a message to someone or donating one dollar — can change somebody’s life. What kept myself and my mother going was not when someone came and gave a million dollars to us… it was a biscuit that kept us going. If it wasn’t for that small biscuit, I wouldn’t be here helping hundreds of youth in Africa.

One mum's journey to discover if her child has a killer disease.

22-year-old single mum Aline Nsabimana is concerned for the health of her three-month-old son Roger after he woke with a fever and began coughing two nights ago. She fears he may have pneumonia - a killer illness.

Are you and your School community up for the challenge to become a FAST Youth Ambassador for Concern?

One mum's journey to discover if her child has a killer disease.

22-year-old single mum Aline Nsabimana is concerned for the health of her three-month-old son Roger after he woke with a fever and began coughing two nights ago. She fears he may have pneumonia - a killer illness.

Are you and your School community up for the challenge to become a FAST Youth Ambassador for Concern?