A safe space for women and children in Bangladesh

Women and children on the streets of Bangladesh are faced with the constant threat of violence and sexual abuse. Our centres offer them a safe haven and a place to build a better life.

In Bangladesh, the urban population is expected to increase from 53 million people in 2014 to 79.5 million people in 2028. Hundreds of thousands of people sleep each night on the streets of crowded cities. Many arrive from rural and coastal communities, no longer able to cope with the stresses of a changing climate. Some are born there, having never had a home to call their own.

Sadia* is 15 years old. She was born on the streets of Dhaka. Faced with the struggles of making enough money to buy food, she was forced to beg on the streets as a very young girl. Her father left when she was five, leaving her mother with no choice but to leave Sadia first thing every morning to beg. Sadia would spend her days waiting; alone and hungry in the hope that her mother would make enough to buy food. Most often, her mother would return late in the evening with no food. Sadia was only six when she decided that she too would beg on the open streets.

Sadia, her mother and her younger brother had nothing – no possessions, no bed, no blankets, no shelter – just the concrete pavement and the dusty, smog filled air of the bustling Dhaka streets. Winters were the hardest, when the cold nights often robbed Sadia and her family of sleep.

When we didn’t have the money to rent the blankets, we would hug each other to keep warm. I have spent many nights where we can’t sleep and just sit in front of the fire because it is so cold.

Poverty and hunger were not the only risk to Sadia’s young life. The streets are a dangerous place for any person, but especially for women and girls. Men would often approach Sadia and offer her money for sex. If she refused, she risked being beaten, or worse, kidnapped. And she was one of the lucky ones, with her mother to protect her. Many of her young friends were not so lucky, with no-one around to look after them.

It is unthinkable that a young child should have to endure suffering and fear like this at such a young age. But that is the heartbreaking reality for so many in the cities of Bangladesh. 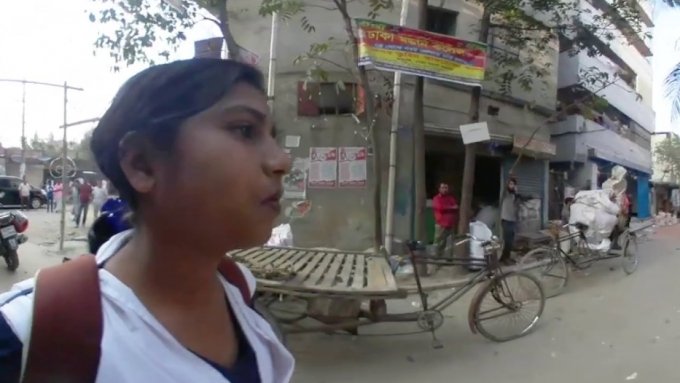 We’re working to support people living in slums, settlements and on the streets of Bangladesh’s urban centres. Our programme aims to lift the poorest and most vulnerable people out of extreme poverty. And few are more vulnerable than women and girls living on the streets.

Our Pavement Dweller Centres (PDCs) offer them a safe place to rest their head at night. The comfort and safety of a place to lay their head without fear of attack. They also offer a range of services which offer the women and girls who stay there hope for a better future. The services provided range from the very basics, (like drinking water, food and cooking facilities, bathing and sanitation facilities) to more comprehensive supports like providing day care for children so that mothers may access training and start earning income to support their families. And young girls like Sadia are supported to go to school.

Dreams for the future

Sadia’s entire life was transformed when she was able to access the services provided by her Pavement Dweller Centre. As a young child she had been trapped in a cycle of hunger, poverty and illiteracy, along with the constant threat of violence. Now she attends school and is able to live a normal teenage life, full of fun, ambition and dreams for the future.

You can help us to support the world’s poorest and most vulnerable people by donating today.

Our Executive Director, Danny Harvey, explains why addressing gender inequality is vital in tackling extreme poverty and reveals why 2020 is a pivotal year for advancing gender equality worldwide.

Top ten charity gifts to give this Mother's Day

Whether it’s a mother, grandmother, godmother, stepmother or anyone that’s made a difference in your life, this Mother’s Day give a Concern gift in her name and she’ll continue to make a difference to those who need it most.

Our Executive Director, Danny Harvey, explains why addressing gender inequality is vital in tackling extreme poverty and reveals why 2020 is a pivotal year for advancing gender equality worldwide.

Top ten charity gifts to give this Mother's Day

Whether it’s a mother, grandmother, godmother, stepmother or anyone that’s made a difference in your life, this Mother’s Day give a Concern gift in her name and she’ll continue to make a difference to those who need it most.

people reached, in 23 of the world's poorest countries